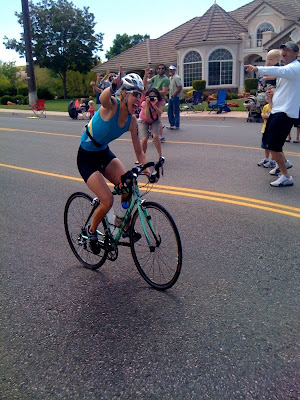 Daisy on her first bike lap.

This past weekend I packed up the van and the kids and drove them to St. George to watch Daisy in her first Ironman Triathalon. The experience was, in many ways, unbelievable. First, incase you’re wondering what an Ironman is, let me enlighten you. A 2.4 mile swim, 112 mile bike and a marathon (yes, you heard me right). Daisy has been training for this for a year, but let it be said…I think that she’s really been training for this her entire life.

We spent the day, Saturday, driving from one part of the course to another to cheer her on. I felt like a total heifer as we sat comfortably on the side of the road with our foot long sandwiches, 64 oz. Diet cokes and bags of chips—pausing for breath only occasionally to yell out, “Good job!” as very toned, incredibly fit athletes whizzed by so quickly that if you blinked—they were gone. We had quite a system to figure out when, exactly, Daisy was coming. Shayne and Dad were never far from their phones as they tracked Daisy’s progress, by her electronic chip. Shayne also had family and friends stationed at different points along the course and they would call/text/tweet updates as well. Finally, unable to calm her nerves and just wait, Nana would walk ahead a quarter mile and watch for her there. As we heard her signal whistle we knew that Daisy was always close and get in position to cheer. She always looked amazing and smiled and yelled and waved. And then, just as quickly we’d pack up our chairs and head onto the next spot. 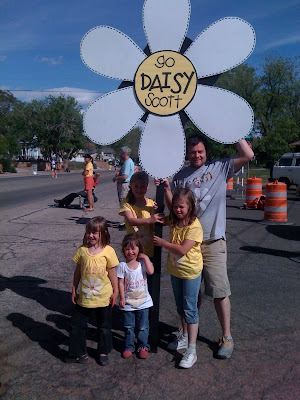 Shayne and the girls sporting the "Team Daisy" t-shirts that I made. One of their friends made the sign.

In our defense, however, it was no small feat to get 10 children from one spot to another and then, while we were there, make sure that no one got killed by an overzealous athlete on a bicycle. Plus coordinating meals and naps for said group was a nightmare. As Dad later put it, “She [Daisy] has no idea what we’ve been through today.” This after 12 ½ hours of extreme exertion on her part.

When Daisy was on the run, we were so excited. We were like, “she’s on her run! She almost finished!” And then we’d realize that it was still a marathon. A MARATHON people! It was crazy. All of those people out there, still running after all those hours swimming and on a bike must have superhuman powers. It was, as I said, unbelievable. Daisy was hoping to finish the race in 14 hours. She WAY exceeded her expectations and finished in 12 ½ hours. She was AMAZING! What was really extraordinary to me was that there were so many people who were able to finish this thing. I had no doubts that Daisy would be able to do it, but was so surprised that there were so many people out there like Daisy. My heart is still cheering for all of those people and what an amazing thing they’ve accomplished. 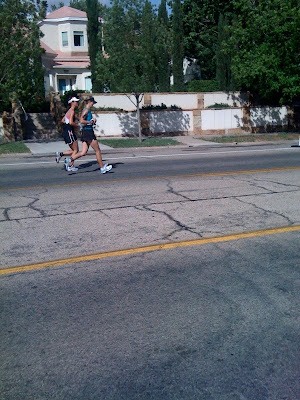 Daisy on the run.

The next day we HAD to go on a hike because that’s all Canyon wanted to do the whole time we were there. We went to Dixie Red Rocks? I’m not sure if that’s what it’s called. I took my kids and three of Daisy’s and the kids had a blast running around and hiking on the red rocks. They found caves and ledges and sheer cliffs. It was at this point that I wondered if I was crazy to take seven kids out there on my own. The adult/kid ratio wasn’t the greatest. They had a great time though. It was so much fun for the cousins to play together as they don’t often get to see each other. 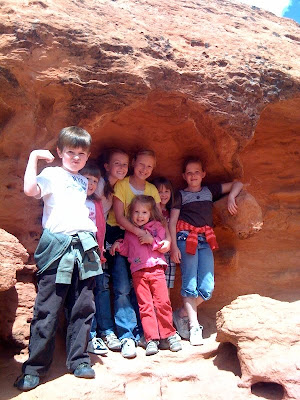 All the kids on our hike.

A big thanks to Dustin’s aunt, Jackie, for letting us stay in her beautiful home. The kids slept great and I loved sleeping with the widow open and listening to the crickets all night long.

Anyway, Daisy, you were incredible. We had a great time coming to cheer you on and are bragging about you every chance we get. 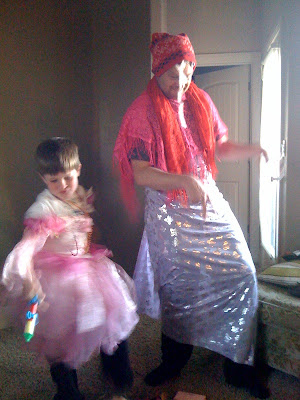 And lastly, we were happy to provide a boy for Shayne to do "guy stuff" with.
( You really thought you'd never see this, didn't you, Shayne!)
Posted by Emily at 1:34 PM 6 comments: