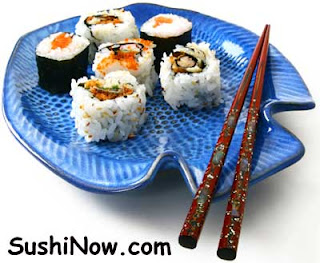 Alice, Jane, and I have been eating a lot of sushi lately. Yes, you heard it right. Alice LOVES sushi. When I bring it home she says “Yeah! Sushi!” Jane loves it also and Canyon will eat the seaweed and rice because he believes that Pirates probably eat seaweed sometimes. I think it started because I would get the ‘real sushi’ and make mac & cheese for the kids. Alice caught on real quick, though, that because I was making them eat something else, this sushi thing must be really great. So, I can’t keep it from her anymore. Lily wants to like sushi, but she can’t get past the texture…So it’s our big treat and once and a while, we can’t help it…and we get sushi.
Posted by Emily at 9:35 AM 8 comments: 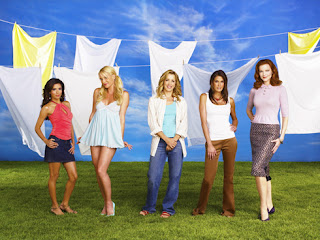 So let me preface this entry with the fact that I do not often watch “Desperate Housewives.” I would probably have never watched it at all except that when Tammy and Derek came out here a couple of years ago…they would come over every Sunday night and watch it religiously. So, for awhile, I was somewhat aware of the characters, etc. However, I haven’t watched it much since then…mostly because Dustin throws little man fits whenever the History Channel/Discovery/The Learning Channel isn’t on. Anyway, the last few weeks for some reason--probably because we’re both so tired we haven’t had the muster to change the channel—we have watched parts of it. So I was watching it on Sunday and Dustin was on the computer trying not to watch it (he’s so above “Desperate Housewives.” Now, let me explain one more thing…I can’t for the life of me ever remember the main character’s names…let alone new characters. So I’m always saying things like, “what happened to that one girl who was the writer? She’s pregnant now?” and things like that. The only one I remember is Lynette, because she is the most normal.

Anyway, Dustin starts saying things about the show, things that only a diehard fan should know (like character names). He’d say something like, “You know what’s going to happen, Victor and Carlos are going to fight and one of them is going to get killed.” Despite the fact that this statement is insanely ‘out there’ I’m freaking out because I don’t even know who Victor and Carlos are. How does he even know their names? It gets even weirder when Victor and Carlos do fight and Victor gets impaled by a fence post (they’re fighting in the middle of a tornado, yes, a tornado: I didn’t say it’s realistic).

Then he says: You know they just brought Sylvia on so that they could kill her, so you know she’s going to die.
Me: Who’s Sylvia ?!?
I’m absolutely incredulous. For the entire episode he’s spouting off accurate information. And all I can think is that he really must like “Desperate Housewives” more than he ever let on. It’s like this weird revelation: Dustin’s a closet “Housewives” fan.

I’m still reeling in disbelief as we go to bed…until the next morning. I open the computer to check my email and a “Desperate Housewives” blog comes up…with a synopsis of said episode, it includes all the names and explanations. I peed my pants I was laughing so hard. For those of you who don’t know Dustin…he’s not the most funny guy, but when he wants to, he can really kill.

When presented with the evidence, he was pretty proud of himself. So, if any of you are wondering what’s up with Susan, Edie, Bree, Lynette, and what’s her name, give Dustin a call.
Posted by Emily at 11:05 AM 6 comments: