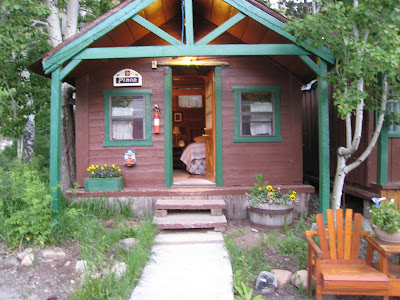 Dustin and I finally took a weekend away. It was our anniversary and we haven’t been a night away from the kids for several years. I was nervous at first, but by the end of the trip I was ready and willing and wishing that we could stay away at least a year or so longer. It was so GREAT! (no offense to the kids). We went and stayed at this little resort in the Sierras, just off of highway 88. We’ve often driven that way from Tahoe and have always wanted to spend more time there. The place that we stayed, Sorensen's, was amazing. We had our own little two-person cabin, set in the most beautiful place imaginable. We ate all of our meals out on their little deck, amidst mountain flowers and lots of butterflies, and went hiking and to some hot springs, just laid in a hammock, read, slept in, ate and ate, and even had time to fit in a movie at the nearest little town. I’m not quite ready to come back to reality, but to reality we are and we hit it HARD.

Thanks to Grandma Laurie who exhausted herself with our four angelic children…probably she didn’t even have to lift a finger, they’re so perfect. She should really be thanking us. 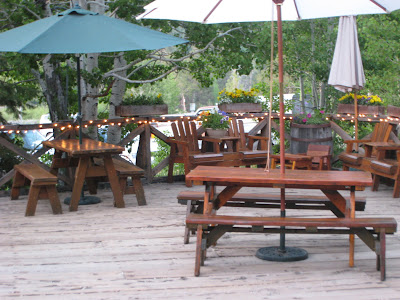 On Farming: Of Life and Death 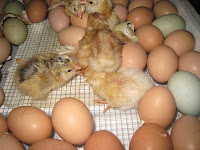 I am officially a very successful mother hen. Apparently it’s not easy to hatch chicken eggs, so in anticipation of being very bad incubators…we decided to start with 48 eggs. The idea being that several wouldn’t be fertilized, several wouldn’t develop right, and several would be instantly killed by curious little hands. We were thinking that we’d get, maybe, 20. So after three weeks (21 days exactly) of monitoring temperature, turning the eggs three times a day, and sleepless nights of worry because I believed that I “cooked” them—by the way, pregnancy’s a breeze—the eggs began hatching.

It began on the 20th day when I was turning the eggs and heard some distinct chirping. In surprise, I stopped turning the eggs and the sound stopped. I thought maybe there was a bird hiding out in the basement or something…but I couldn’t find one. I continued to turn and, there it was again. I thought I was a little crazy, so I called Jeremy and he said: “Oh, yeah, I forgot to tell you, you can hear the birds chirping through the eggs. It means that they’re getting close.” Minor detail.

That night, while we slept, three chickens hatched. By the time I got home from swimming there were six. After breakfast, there were eight. By that night there were fourteen. By the next morning, twenty. And throughout the day, the counting finally stopped at forty-two. So, as a mother hen, I’m 95%. The rooster, apparently, was a great fertilizer (as any who are willing to observe the chickens for more than five minutes can tell you), most developed well (we got a couple who couldn’t walk), and they weren’t killed by curious hands…oh wait, yes, they were. We lost seven after the mob of “gentle” children-handling. So. Thirty-five chicks. Anyone interested in adopting a few? 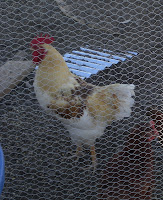 On a different note. The rooster had now fulfilled his usefulness, and seeing how he was starting to attack the children, we decided to KILL it. Jeremy came over with a hatchet and did the job. I will spare you the details, but for anyone who’s interested, I filmed it and you are welcome to view it at your next visit (no, I’m not going to put it up on youtube). Suffice it to say, chickens do really run around for several minutes after their head is severed from their body. We are expecting at least one of the thirty-five new chickens to replace him. The rest we’ll eat.