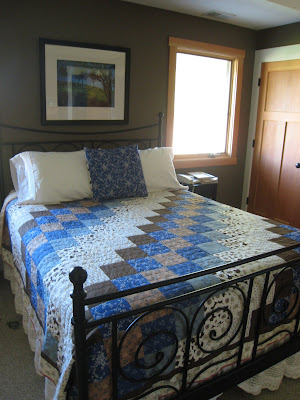 So I wasn’t a total slug this summer. I actually accomplished a few things that have been on the table for a LONG time. I finished my quilt. People seem so amazed when they come to my house and I show them progress on my quilt. They seem flabbergasted that a person with four small children could have time to make a new quilt for my bed. I just humbly nod and shrug my shoulders as if I must be the most AMAZING housewife in the world. What I don’t tell them, and would appreciate if you don’t let on, is that I have been working on said quilt for darn near a year. So don’t get all down on yourself because you aren’t making these charming heirlooms…just do it like I do—take a really, really, really long time. And then the key is to act as if you just started it last week and *sigh* the binding, that I did by hand, was painstaking work…I was able to finish it in a few hours—but no pressure. Don’t tell them that you stretched the “handwork” out into days because it gave you an excuse to sit and watch “Stargate” and “Northern Exposure.” I mean watching TV is totally justified if you’re also handcrafting a masterpiece. If anyone needs binding work done…let me know, but make sure to drop off a few DVDs with the quilt.

I also made, as Alice calls them, “Muppets” of each of the kids to play with (of themselves). They’re darn cute, but not as big as a hit with the kids as I would have hoped. 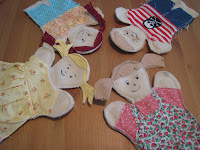 And then the pillows. I made some pillows to go with this great bench that one of Dustin’s clients gave us. I LOVE the effect. The fabric was great…I love expensive fabric…you can’t really go wrong. 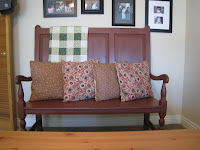 As for now, I have two projects that I’m now working on. Isaac and Elise have requested a quilt for Christmas and I’ve happily aquired fabric for it and a GREAT idea. Let’s see if I can pull it off. Also I am happy to quilt and bind (again, the binding) a quilt that Marty’s wife, Bonnie, pieced. She did an amazing job…I hope that I can quilt it to her expectations. Also, I hope that she wasn’t expecting it any time soon. So, now that school’s in…maybe I’ll have time to finish these other projects.

Tell me honestly though, don’t you just LOVE the binding on my quilt? 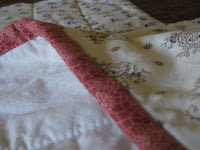 It happens every year. One minute I’m smiling, all misty-eyed, as I watch my kids laughing and running through the sprinklers at sunset. A perfect ending to a perfect summer day. And I think, “I just want it to be like this forever and never want to send them to school.” And then, a few days before school starts, when I’m wrenching my heart out on a daily basis because I’m going to miss them so much… there’s a sudden shift in the universe, or something like that, and I’m screaming at them that I’m so glad that school is starting because I can’t stand another second of the infernal and constant noise level. Then, WHAM, perfect timing…school does start and everyone’s happy, especially me.
Posted by Emily at 10:16 AM 4 comments:

Christmas in August, I guess.

While there are a lot of things that I’ve needed to address: namely stitches, homemade puppets; circa “What About Bob,” and an ‘almost’ completion of my new king-size quilt—I have neglected to write about them because, well, I’ve been feeling EXTREMELY lazy. But one thing that I’ve been thinking about has pushed me out of this malaise and this is the topic of meat. Yes, meat. Ever since my anemic pregnant days with Lily (8 years ago) I have been a veritable meat eater. I have recently decided that I would like to be a more conscious meat eater, and by that, I mean possible raising and eating my own meat. We have the space to do this…I just have to get the guts. We don’t think twice about buying as much meat as we can from Costco, and yet, at the same time spend more time and effort on animal rights than human rights. And by ‘we’ I mean the collective conscious of the American media. We will be killing some of the chickens in the next couple of weeks, and while I think that this task would be a lot easier if I was STARVING, I’m still willing to give it a try. People are shocked when I tell them this, yet they have no problem going to the grocery store and buying any type of meat. I think that by actually raising and killing your own meat…you tend to respect the process and it’s part of our nature, no matter what some psycho environmental vegan wants to tell you: we are meat eaters…it’s how we’ve survived.

Now it’s one thing to kill an ornery old rooster, yet another to kill an almost sentient cow: a mammal. This morning I was lying in bed and I heard a bang. It sounded like a gun-shot. Most people would be a little freaked out to hear a gun-shot in their backyard, but this time of year, the vineyards are CONSTANTLY shooting off cannons to scare the birds, so I didn’t think too much of it. And then, I heard it again…and it was definitely different than the cannon shots. Dustin came and I said, “Did you hear that shot?” He looked out the window and then remembered, “Oh yeah, Dan (our neighbor) said that he was killing his steers today.” Dan and his kids raise several steers every year and then sell them at the county fair. They had a few left over that they were going to send to the butcher and then sell them as meat. I looked out the window and saw the two huge animals lying on the dirt in their backyard. One of them was still twitching and I stood there and cried. I cried, but at the same time I was conscious of the fact that this is how we eat our meat. And I respected these animals and the men who were deftly skinning and sectioning them. These men worked fast and quietly and, it seemed, from my vantage point with respect. I doubt that the cattle killed in the feed lots get any kind of deferential treatment.

So what am I saying. I don’t know, except that I got real riled up after listening to a ‘perspective’ on NPR talking about how we shouldn’t eat animals at all because we shouldn’t kill animals. I’m sorry, but GET A LIFE. If you want to be a vegetarian, fine, just leave the rest of us out of it and get behind a real cause, like human rights. So, when we finally get our first meat steer, get a big freezer and then get in line for some free range, grass fed, organic beef all from ONE cow.
Posted by Emily at 8:03 PM 5 comments: