Pictures From My iphone this past week.

Dustin's granddad passed away and we made the trip up to Portland to attend the burial and memorial. It was moving and sweet and even though the trip was long (driving) and short (one day to be with family) it was worth it. We will miss Granddad's visits and stories. 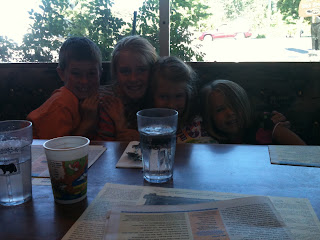 In Mt. Shasta on our way to Portland. Eating at the original Black Bear Diner. We were able to eat at Aunt Donna's PB & J Cafe on the way home, which was much appreciated. 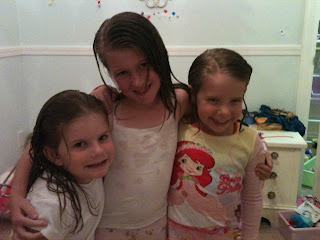 Playing with our favorite bestie: Sophie 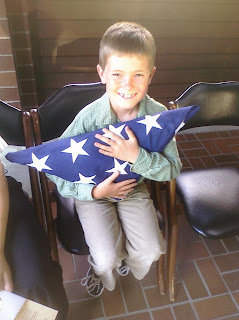 Canyon, holding the flag that was draped across Granddad's casket at the end of a very moving military ceremony, which included crisp respectful soldiers, taps, bag-pipes, and jets flying low. 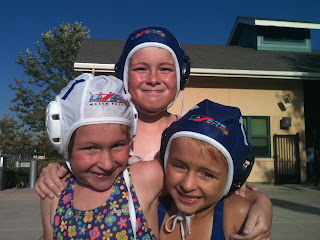 Home again in time for water polo on Friday.
Alice & Canyon: Thumbs up. (That's friend Amy).
Lily: not so sure (even though she scored about six times)
Jane: Pleaded and pleaded to play not realizing that in the chaos of kids and a ball and water too deep to stand it would literally kill her.
Posted by Emily at 12:07 PM 2 comments:

That day, ten years ago, was like being underwater in a mountain lake where everything is bright and clear yet every movement is deliberate and it’s difficult to breathe. I sat with my one-year-old daughter in front of the TV and watched in that strange filtered moment as the twin towers fell. I spent the morning there, like the rest of the world, glued to the television. My thoughts were cluttered as I tried to make sense of the encompassing tragedy.

The day was strange, like a holiday, but cheerless. It seemed the world had come to a screeching halt. Yet, there was one thing I did that day to ground me to the old life, the life before September 11th. I went to piano lessons and that act of normalcy was like a pushpin holding a random collection of receipts, clippings and photographs to a pinboard. Chaos held together and organized by one thing: music.

I was learning Beethoven’s Piano Sonata 14, the Moonlight Sonata. As I played for my piano teacher I felt all the emotions of the day were released, unconfined.

In the following days and weeks the Moonlight Sonata became my comfort. I played as the High School across the street lowered their flag to half-mast. I played as my neighbors placed flags on their front porches. I played as my toddler looked at the sky with wide eyes, wondering where the silver flash of highflying airplanes had disappeared.

And while I played I thought of the past two hundred years. I thought of all the people who came before me who had found comfort in this same sonata. People who had experienced unimaginable loss. I visualized the music drawing us together. Linking us—past and present—like an invisible web of solidarity.

My daughter is eleven now and while she hasn’t mastered Beethoven yet, her halting rendition of Fur Elise reminds me music is what makes us human. It has been ten years and I still play Moonlight Sonata and when I do, I remember that day and how amidst the violence, I found peace and hope in a humanity that can find solace in the creation and love of music.