A few years ago we had invited some long-time Prusso friends over (their kids grew up with Dustin and his brothers) and she had brought this amazing angel food cake. I remember at the time being enamored with it and begging her to help me make one and she had agreed. I figured that she had agreed in the same way that we all agree as we meet new stranger/friends at the park to ‘get together sometime,’ as we pretend to exchange phone numbers. However, in desperation, I called them and even though they were totally doing other things, more important things, promised to help me. So the afternoon of Lily’s birthday, Barbara and Monty (both of them) came over and held my hand as they walked me through the process. They were so great, they made me do it all myself as they gave very specific instructions and explained why everything had to be ‘just so.’ 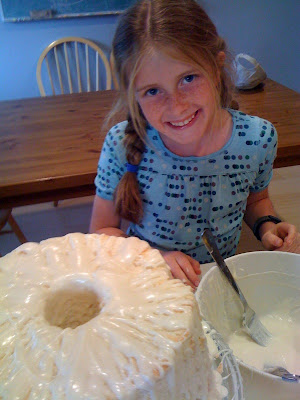 Lily, 'helping' to put the icing on her perfect cake.
And the result of this afternoon was an amazing, delicious angel food cake. And I have so much gratitude for this couple. I mean they’re retired they should be traveling or playing golf, not stuck in my kitchen with screaming kids helping me make a cake. What a great birthday gift to me.

We invited them for dinner and they came and we ate and we inhaled that delicious cake. And the best part was that Lily was SO AMAZED with that cake. She’s at the age where she can really appreciate things like homemade angel food cake.

In other Lily news, big Lily news…she’s going to leave us for a month this summer to go to Spain. Yes, that’s right, Spain. She was invited by my brother-in-law and his Spanish wife to go with them. It was not easy to say yes, trust me. But I had to look at this in a much larger perspective. Not that I’m losing a daughter for a month, but how this experience is going to change her life. Forever. I’m excited for her and nervous for me. But, as she said when I mentioned that she wouldn’t be able to do swim team this year if she went, “Mom, I’ll be swimming in the Mediterranean everyday.” Well. It’s hard to argue with that.

A Beach in Malaga.
So she’ll be off in less than a month with a passport in her pocket, an itouch loaded up with books, movies, music and skype (so she can call home), and a suitcase packed with swimsuits and sandals—enough to get her through a month of the Mediterranean.

Am I jealous? Yes. Very. I guess this is one of those sacrifices that parents make for kids. My parents did the same for me.

I did, however, renew my passport as she got hers. Cause, you never know.

Last bit of Lily news. She insisted that I make her a new quilt, once that would be bunk-bed compatible. So, with a burst of creative energy not seen since Fall of ’08, I made her a new quilt. The self-imposed stipulations being I could spend no money. I almost made it. I spent $4 on the binding. But the rest of the quilt was made of scraps that I’ve had or inherited. I didn’t turn out too bad and the bonus: She LOVES it. 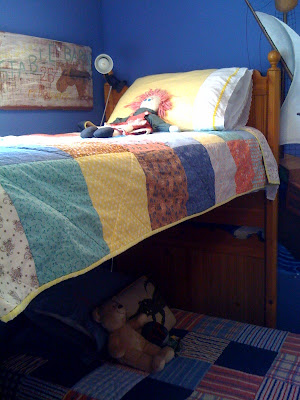 Her quilt. On the top bunk.
This concludes my post of all things Lily. Feel free to leave comments that support my decision to send a ten-year-old to Spain—I’m in need of encouragement and commiseration. Do those words even go together?

Remember, I have a passport. Invite me to Europe. Anyone.
Posted by Emily at 12:36 PM 5 comments: