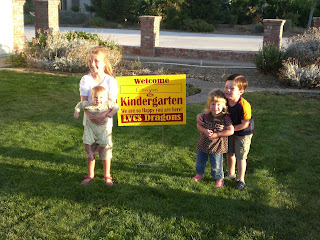 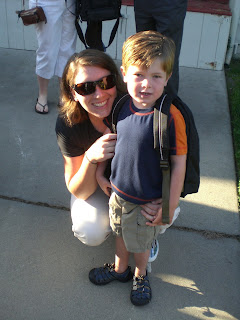 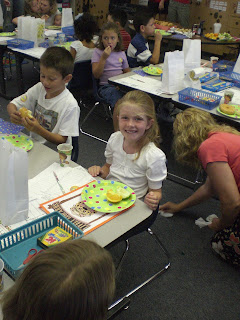 It’s official…the first day of school has come and gone. The dreaded first day of kindergarten with Canyon is, even now, fading from our psyches. It was a whirlwind of a day beginning with waking up to a sign in our yard that said: “Welcome, Canyon, to Kindergarten. We’re so glad you’re with us. LVCS.” So, out loud I’m like, wow that’s neat that they put signs out for every kindergartener—but inside I can’t believe that some parent has the time or energy to run around at midnight on the night before school to place 100 signs. Call me old fashioned…I guess I don’t need the fluff. I think the day was a bit overwhelming for him, when I picked him up he was on the verge of tears and saying things like, “I think my teacher didn’t feel good because none of her friends were there.” It took me hours to decipher that that was a reference to preschool and the four teachers, opposed to just one now. However, by the end of the day he was recalling his first day fondly and telling everyone that he loved his new teacher. So that evening as I was attempting to hurry everyone to bed, I explained that we needed to go to bed so we could get up for school:
Canyon: “again?”
Me: “yes, we have school everyday.”
C: “Oh.” Pause and then a not exactly enthusiastic but more of a matter-of-fact tone: “ok.”

I guess I failed as a parent to prepare my son for what, exactly, kindergarten is…but by now, I believe that he’s getting the idea. Alice, on the other hand, does not get it because every morning she gets dressed and puts on her backpack (or pack-pack as she likes to call it) and announces, “I ready for school.” Oh, poor Alice…she still has three more years in the prison we fondly call…home.

Lily also had a great day. She is looping (which means she has the same classmates and teacher for two years) and so it was a great day because, other than a summer at home, no transition. She jumped right back into the swing of things and was certainly the most popular girl in her class because of the four gruesome stitches sewn right above her eyebrow (all I’ll say is that it was an incident involving a swinging gate, children, very little grown-up supervision, and things that children do).

I have pictures, I’ll post later. So how was your first day of school?
Posted by Emily at 1:40 PM 3 comments:

Well, it’s official, we have a new obsession. Of course, the new obsession doesn’t vary far from the old and neverending “pirates” fixation: it being, of course, “Goonies.” Now I know that all you parents out there know exactly what I’m talking about because we, ourselves, were once Goonies. What seven dollars at Target will get you is pure giddiness and neverending discussion about treasure maps, fugitives, one-eyed Willie, Chunk, Goonies, caves, wishing wells, secret waterslides, dynamite, and a treasure loaded pirate ship. Canyon’s been searching for a treasure map ever since. Bonus feature: a movie that we can all enjoy. So net-flix it or rummage around for it in the Target $7 movie bin…make some popcorn, sit back and enjoy.

We are feverishly trying to enjoy the last few magical moments of summer…mourning the beginning of the extreme business school brings. We’re spending as much time at the lake as possible and trying to pretend that in a few short days we’ll be spending our time at school (kids) or driving to and from school (me & babies).
Posted by Emily at 3:20 PM 2 comments: 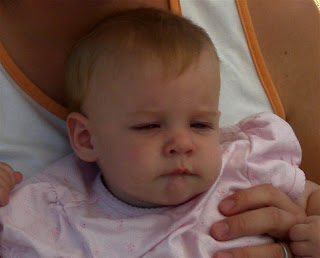 For those of you who don’t know, we have been remodeling our master bedroom/bath for—going on—5 months or so. It’s great because we’re going to have a beautiful bedroom/bathroom…but it hasn’t been so great to be smashed into fewer rooms. Because of this, Jane has been sleeping in our room for her whole life. The last few weeks she has been getting up two or three times to nurse, and it’s killing me. So, I finally opted for the inevitable, yet extremely difficult option, letting her cry. It’s virtually impossible to do if you’re in the same room…so I set up a crib for her in the sewing room. The first night she cried for about 45 minutes…and…drumroll, she hasn’t cried since then and has been sleeping through the night. My quality of life has just been raised up a few notches. I suppose the pity party is over.
Posted by Emily at 9:05 PM 6 comments:

You are all welcome to join me on my “Dustin went backpacking for a week and left me vulnerable with four crazy kids” pity party. It was, to say the least, a difficult week…besides temper tantrums, an all-nighter with Alice, shots for both babies, plenty of “playdates,” a trip to the lake…and the icing on the cake (literally) the gallon size container of syrup that Lily dropped on the bomb shelter floor (insert plenty of crying here, by mom, Lily, & a hungry baby Jane) it was the week of exhaustion. Oh did I mention that we are having the annual Root beer tasting Elder’s quorum party tonight? 120 people, children, and gallons of gourmet root beer. Yep, it’s that kind of week. So join me for a pity party: there will be lots of chocolate involved and a few tears.
Posted by Emily at 2:09 PM 9 comments: 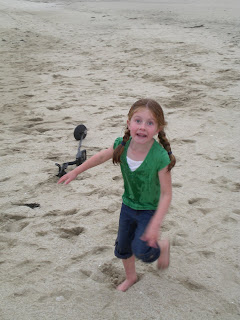 The other day I truly had a challenging, yet rewarding, mothering day. Canyon went to spend the afternoon at a friend’s house and the babies were taking a nap and so it was just Lily and I. The plan for the day was for her to practice the piano and then I would download a “Hannah Montana” episode for her to watch…the idea that if she practiced well—she would get to watch her show (some people, I think, call it bribery—I prefer to call it motivation). She happened to be learning a more difficult song than she’s had to play before—where both hands are doing different things and even, perhaps, contrary to each other. It reminds me of the quote from Jeeves & Wooster “Well I don’t see what the big deal is [playing piano], it’s just one had doing one thing and the other doing something else…why I do that with my knife and fork while I’m eating.” Anyway, she had a melt down, “I can’t do it, it’s too hard…” and so on. Any of you who have children with extreme sensibilities will understand the difficulty of this situation…because no matter what you say or do…you’re wrong. So, no matter what I said or did…I was wrong.
I took a deep breath and told her that I would be cleaning the kitchen and that when she was ready for my help (and I mean accepting it without loud sighs, rolling eyes, & moaning), then I would be happy to help her. I worked on the kitchen while she worked out the screaming, grunting, crying, and complaining. Eventually she said, in a relatively calm voice, “I’m ready for your help now.” We started with a review of all the notes, and worked on the piece one hand at a time, and then worked on two hands together, all the while counting and I have to say, hopefully without too much confidence, I WAS GOOD. I deserved the gold star of the day because I was SO PATIENT. I’m confident that anyone else, and I mean anyone would have cracked. In fact, the government should use Lily as an interrogator…she would get people to start spouting facts in about two minutes with the “practice piano routine.” She finally got the song, watched “Hannah Montana” and then went outside to play. A while later…and here’s the trophy…she came and gave me a hug and thanked me. She actually thanked me. So I guess this is why I do it.
Posted by Emily at 1:28 PM 6 comments: