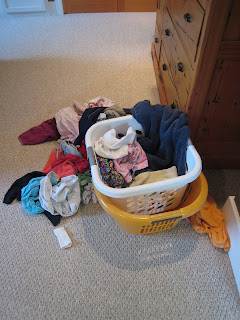 I have been overwhelmed with laundry. Last night I asked for help from some person who lives in our house and who has the ability to fold laundry. It didn’t happen. So I didn’t fold the laundry. When I got home from swimming this morning this was the state of the clean laundry basket. Everyone ravished it for clean clothes and went on their way. It hadn’t occurred to me that this would be ok. But --here’s a secret-- apparently they don’t care if you fold their clothes or not. They wear them just the same. That’ll cut down on several hours a week. I’m so EXCITED!

A Conversation about Chickens. 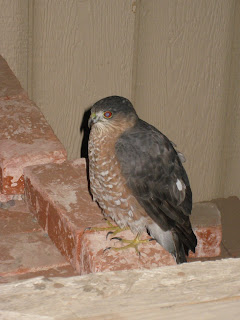 A baby chicken hawk we found out by the coop one night.
It was smaller than the chickens but eying them with predatory instincts.
The chickens were FREAKING out.

We are living in a tiny ecosystem and even though it’s hard to imagine that nature is still natural in our little suburban bubble…it does exist. I am particularly talking about survival and chickens. We have had several instances of chicken death (besides the hatchet and roast chicken for Sunday dinner): our neighbor’s dogs, chicken hawks, perhaps an owl and now—a mystery predator. We think it’s either a coyote, fox, or even a possum or skunk? Not really sure, all we know is that something found our chickens and they’re reliving a culinary dream every night. We find the fence torn into, feathers EVERYWHERE and a missing chicken or chickens (sometimes with parts left behind). It’s a mystery and we can’t stop it. So here’s the conversation between my husband and I:

Dustin: You know, Ma would’ve figured out how to protect her chickens by now.

Me: Pa would’ve slept outside with his gun and killed whatever was getting his chickens.

Dustin: Pa would’ve been on his 40 mile trek to town with his pelts and his wheat; getting essential supplies to keep his family alive (you know, things like sugar and white flour).

Me: Well, Pa would’ve seen to it that Mr. Edwards was doing the chores and Mr. Edwards would have, FOR SURE, slept by the woodpile to kill the chicken killer. Or he would’ve at least left a gun above the door, loaded, for Ma to use. I’m just sayin’.

Dustin: speechless.
Posted by Emily at 9:26 AM 8 comments:

To Librarians Everywhere: Angels That You Are.

Once again, you have pulled through for us. For the first time in a long time (since I was a girl marathon reading with my own mother), I have had to “share” a book. And when I say ‘share’ I mean it very loosely, a better definition would be sheer literary subterfuge as I snatch said books from a sleeping daughter and she, as cleverly, klepts mine into her backpack as she rushes off to school.

It all started when I decided that I’d better take a book to Disneyworld to read to the kids. I picked a book I’ve been wanting to read: The Lightning Thief by Rick Riordan. I started reading it out loud to them at Disneyworld and right away Lily wanted to ‘read ahead.’ So she started taking it—and—let it be known that I also wanted to ‘read ahead’ and so the battle began. Luckily I had the foresight to download it onto some i pods—but Lily and I both prefer reading to listening…so it continued to be a fight for the book. I also made the mistake of leaving it out while my brother-in-law was here and he started reading it too. Now it was even being stolen and taken out of the house! There were three of us reading one book…and none of us were going to finish it because most of our time was spent coming up with elaborate plans to steal the book. This had to stop. On Tuesday Jane and I walked to the library and I pleaded to you to help me. You didn’t even bat an eye and within five minutes had two book ones for me, a book two, and two book twos on hold in neighboring libraries. I spent the rest of the day driving from library to library (I couldn’t even wait a day for them to deliver to my library) to get all the books. Whew. You saved our lives. We can read now, quietly, without guilt and in perfect harmony—no more middle of the night ninja larceny. In time, we may even be able to laugh about it.

I also happen to know some librarians personally and know how seriously they take their jobs and how grateful we are to you for always finding us what we need; be it new recommendations for a voracious eight-year-old, Star Wars encyclopedias for a six-year-old padawan-in-training, and princess recommendations for Alice in Whineyland and Jane the Beguiling Terror. We will return our books promptly and pay our sixty cent fine (from some previous minor infraction). We thank you, once again with humility in our hearts and apologize to any local Rick Riordan fans as we have literally cleaned the Library of any evidence that he even existed.

Our hearts are with you always—faithful, dutiful Librarians.

With deepest regard,
Emily Prusso
Posted by Emily at 3:59 PM 3 comments: 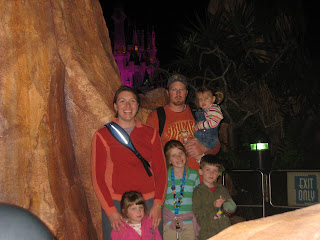 We are back from Disneyworld and we had, if you can imagine, an amazing time. The kids were great…Lily and Canyon were real troopers as they had to hike around sans stroller (Canyon was known to sneak a ride here and there) and Jane and Alice did well sans naps. We had help from our friend Jed and Dustin’s Uncle Bill and Aunt Laura. It was nice to have a ½ dozen extra hands to keep track of the kids. We also were introduced to the world of pin trading and Lily latched onto that and LOVED it. She was able to collect (with the help of generous friends and family) a dozen or so pins. Canyon was not interested in it as it requires talking to strangers and Alice had difficulty with the concept of ‘trading.’ She seemed to think that people should just give her pins without any in return. Jane, well, she was pretty clueless and was more interested in playing with straws than anything else. Here are the highlights of each park:

Animal Kingdom
• Seeing ‘real’ animals (as opposed to the Jungle Cruise at DL)
• A great playground and tons of stuff for the little ones including: nature walks, rides, shows, characters
• The ‘Everest’ rollercoaster ride. Lily went on it 11 times.
• Talking Canyon into an intense dinosaur ride and watching his terrified face (now, that’s the only thing that he talks about).

Epcot:
• Sneaking Alice onto Test Track and her LOVING it (never to be able to get her on again)
• Mission to Space (I’m taking that one on others’ councils as you’ll NEVER see me on that ride)
• Soarin’ Over California (making us a little homesick)
• And the countries and kidcot (where the kids decorate a mask and gather tokens from each country): Canada, Britain, France, Japan, Morocco, Colonial America, Italy, Germany, China, Norway, and Mexico—I LOVE epcot and seeing all the countries.
• The fireworks

Magic Kingdom
• Tom Sawyer Island (of course)
• Fireworks and a Castle that changes colors every few minutes
• A really smooth Thunder Mountain and a not so smooth Space Mountain
• Seeing castles and princesses, it’s a Small World and Peter Pan
• The Monsters Inc. comedy show (really funny—and not at DL)

We spent our last day at Animal Kingdom again because it was so great. We could’ve easily spent another week there—but I think our kids teachers would’ve freaked out! It’s nice to be home again and we’ll just have to let the memories sustain us for a few more years before we can take another trip back there. 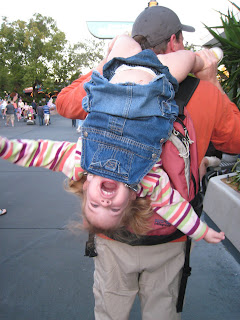 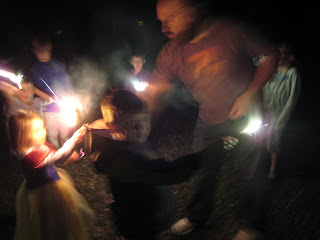 This isn't actually a picture from New Year's Eve. It is a picture from a few weeks ago. I would've posted a picture of us on New Year's Eve, but I didn't think that anyone would be really interested in us lounging around on the couch...falling asleep around 9:30--hey, at least we made it till an east coast midnight.
Posted by Emily at 1:43 PM 1 comment: