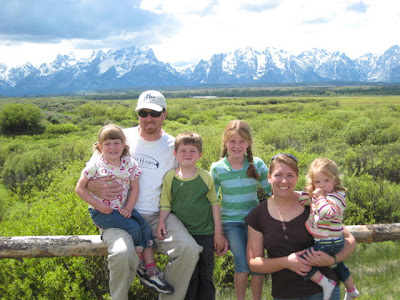 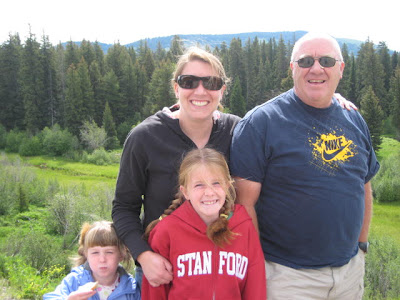 Me, Lily, Alice and Papa in the park.

I’m embarrassed about the amount of time that has gone by on this blog…unattended, lonely, deserted, abandoned while I have been having the time of my life! After the insane whirlwind of the last week of school we headed out on a week long vacation across (as Lily so astutely pointed out) five states in 48 hours. Not a small feat for those of us fortunate enough to live in the west. I’ve never really spent any time in the east, so I shouldn’t judge it—but I definitely think I’m a western girl and I love, love those wide open desert skies, rugged mountain peaks and coldness (yes, cold—I know we don’t have the balmy Atlantic) of the wild Pacific. We drove across California, through Nevada (with its big skies and green desert), to Utah to stop one night and then through a corner of Idaho with its beautiful farm houses and lilacs everywhere! to our destination—Wyoming. We stayed in Jackson Hole with my parents, Sadie and the Ceej and we had a fantastic time. Dustin had never been to Jackson Hole and fell in love with it. He has been trying to figure out how we can just drop everything and move there (I’m never going to leave California though, he’ll have to go without me). We went to Grand Teton National Park and oohed and aahed our way through the green valleys nestled oh-so-close to those sudden peaks. There were wildflowers everywhere, animals everywhere, and the kids were as happy to be there as we were. We went on some hikes and were so happy to see that Alice was able to maintain her hiking enthusiasm even after her virgin hike in Yosemite. She was amazing and hiked some serious three mile terrain without even pausing for breath as she talked and talked and talked (mostly about the pale blue butterflies that were everywhere). Canyon and Lily are coming into their own and hiked ahead with Papa; too serious of hikers to stay with Alice and I. Jane was content to ride in the pack on Dustin’s back and even got a few naps in.

We also took a ferry across Jenny Lake and did some more hiking the next day. The mud was a bit hazardous, but when Alice finally gave up on trying to keep her shoes clean…we were ok. We decided that we have to go back, but next time we’re camping. Oh, and we got to see a moose. Yes, a moose, up close—a few feet away. Jane wasn’t all that impressed. She wondered why everyone was so excited about a horse. 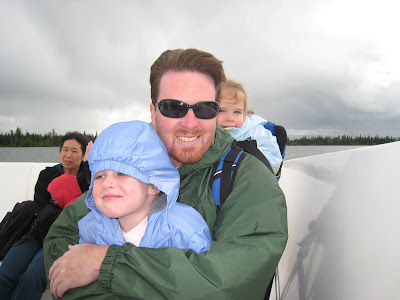 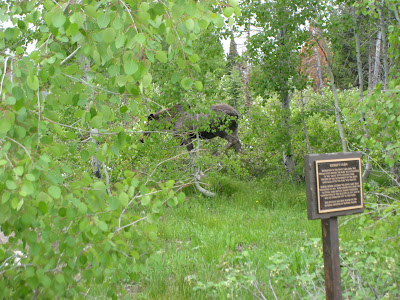 We went back to Logan and had a great time. We went to Summerfest, listened to some great music, were obsessed with baby CJ, and pulled off a great Retirement party for papa which included playing with the Scott girls who had so dutifully hidden their arrival for a whole day without seeing Papa. We had a wonderful time and after a long 12 hour drive home and we finally pulled in the driveway, Jane shrieked (as if she suddenly realized we had been driving all day) that she wanted to go back to Nana and Papa’s house. Canyon was still sullen the next day because he was sorry to be gone. We could’ve stayed another week—but are happy to be home and in the swing of swim team and summer library visits. Aaaah, summer…I love it! 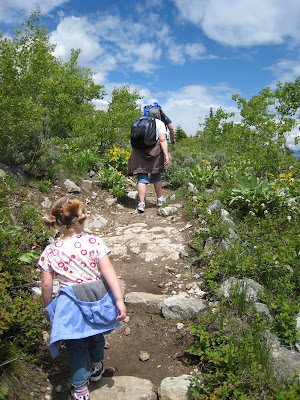 Great pictures. And fun times! I still think you guys all got together and said, "Let's tell Daisy that we are surprising Dad so they are 'in hiding' until the last minute"...thus spending the least amount of time possible with us. So fun though.

sounds like great times! and although i'm in the east now, i'm with you - a western girl. something about the mountains that's amazingly beautiful.

very fun to see your cute family all together - and a great shot of you guys with your dad. :) ah, how i love all you reeders!! :)

Just want to say that you and Dustin look exactly the same and you are as beautiful as ever! What cute little kiddies you have. I'll be tracking your life now, so beware! ;)

I don't know if you'll get this comment, but hopefully you do.

You can check the link to my blog for some info on my life.... married, 2 kids, 1 more coming, that about sums it up!